HFCA hosted a special guest recently as we celebrated a very important milestone. Cambodian Children's Fund Founder Scott Neeson joined in the festivities and put in a great performance on the pitch as his team CCF took on HFCA in a one off match that ended 3 - 3. Scott showed he still has the ability to mix it on the football pitch and it was pleasure to see how all the HFCA boys and girls really enjoyed playing football with and against him.

HFCA presented CCF and Scott a framed photo from the 2017 Homeless World Cup in Oslo,  a tournament he attended to support our Cambodian team as they took on 47 other nations. As a proud Scotsman he was delighted to receive his present which showed the Cambodian team with our friends from Scotland, in Norway.

"It has been a very rewarding ten-year relationship with Happy Football Cambodia Australia. While Cambodian Children's Fund's priorities are education and leadership, we have been able to relay on Paraic, Vibol and HFCA for much of our sporting activities. Seeing our CCF students have the opportunity for teamwork, exercise and to stretch their competitive abilities is a joy. We are looking forward to the next ten years of partnership."

"When HFCA and Cambodian Children's Fund first started working together in October 2009 HFCA had high hopes for the partnership but never would have believed it could have worked out so well. Scott Neeson and CCF share HFCA's belief that to have real significant impact in the lives of disadvanted youth takes long term commitment. There is very rarely a quick fix. We sincerely hope this first decade is not the last and look forward to our next football match in 2029 when Scott put on his boots and showcases those football skills he picked up on the streets of Edinburgh to celebrate another ten years changing lives" 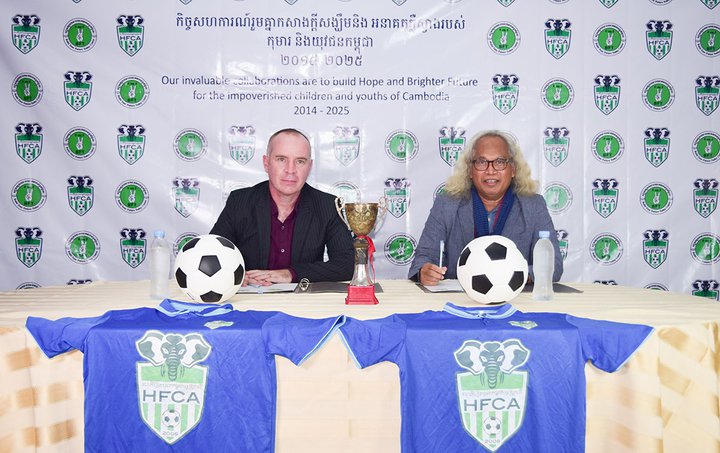