News U14 Championship In Cambodia

The league run by the FFC (Football Federation Cambodia) and ISF (Indochina Starfish Foundation) gives 24 of our players the oppurtunity to play in a proper football competition for the first time in their lives.

The league run by the FFC (Football Federation Cambodia) and ISF (Indochina Starfish Foundation) gives 24 of our players the oppurtunity to play in a proper football competition for the first time in their lives. The 24 players come from our partners, The Happy School, Riverkids and Center for Childrens Happiness.  Every Saturday these players get to take part in championships that give them the opportunity to showcase their talents, to forget about the variety of issues they face in their daily lives, to do the sort of activity that children in the developed world take for granted. The total cost of this 10 week program is $US1200. It does not sound like a lot of money but it has stretched our limited resources to the limit. Without the support of our team sponsors ANZ Royal Bank and your continued support it would be impossible for HFCA to offer opportunities like this.

Round 1
In our first ever competitive game in a local football league the HFCA Champion league team were given a lesson in how to play the game and lost 11-0 to Preah Kanh Reach . Despite the massive loss our players took the positives out of the game and the only way is upwards!

Round 2
Round two of the FFC league was another humbling experience for our Champions League Team and our First Division Team with two big losses. The Champions League Team lost 5-0 to SOS and our First Division Team lost 6-0 to the Sunshine Team. Three games for HFCA and three losses and no goals scored but all the players learn a lot and we will take this experience of losing on board and hopefully learn from it.

Round 3
In round 3 of the FFC U14 championship the HFCA players finally found their own and showed what they could do, winning one game and drawing one game. The Champions League Team drew 2-2 with the CCF Team and our First Division Team winning their first game beating KDFO 13-1. The players were delighted with their improved performances after some big losses and HFCA hope this will be the start of a winning run for both teams

Round 4
In round 4 HFCA won one game and lost one with our Champions league team recording a 7-3 win against the FCF team. Mal Mean scored six goals and Toun Chamroeun scored one goal. Our second team taking part in the First Division League gave Aziza Schoolhouse a close game, eventually losing 5-3 with Ngurn Sok Chea scoring 2 goals and Cheng Mao scoring one. 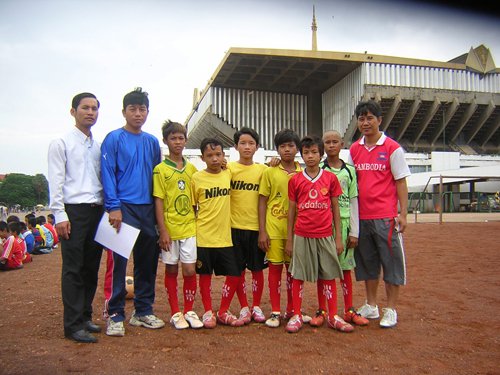 The FFC (Football Federation Cambodian) have announced their squad for their national U14 team.